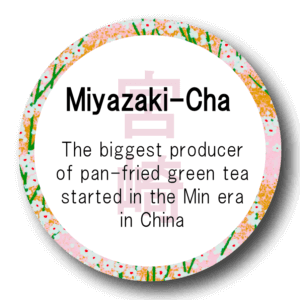 Pan-fried tea was brought to Kyushu from China in the Warring States period and was once a major tea in Japan until the current steamed green tea had been developed.

The tea fried in a big pan at a high temperature makes a nice and delicious aroma.

It is still beloved by many people and its traditional method of manufacture has been has been handed down down from generation to generation.

Miyazaki Prefecture is the biggest producer of pan-fried tea and it proudly represents a high-quality Miyazaki tea.