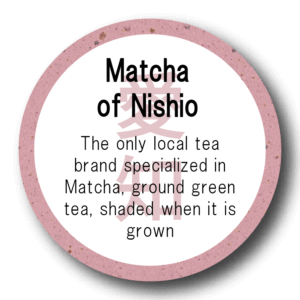 Nishio city and around that area are unusual tea producers because most of the tea grown there is Tencha which is used to make Matcha.

Nishio tea has been approved by the Japan Patent Office as a local brand specialized in Macha for the first time in Japan.

Nishio’s Matcha is used a lot for sweets and to be mixed with other drinks as a favorable flavor and is attracting many people around the world.